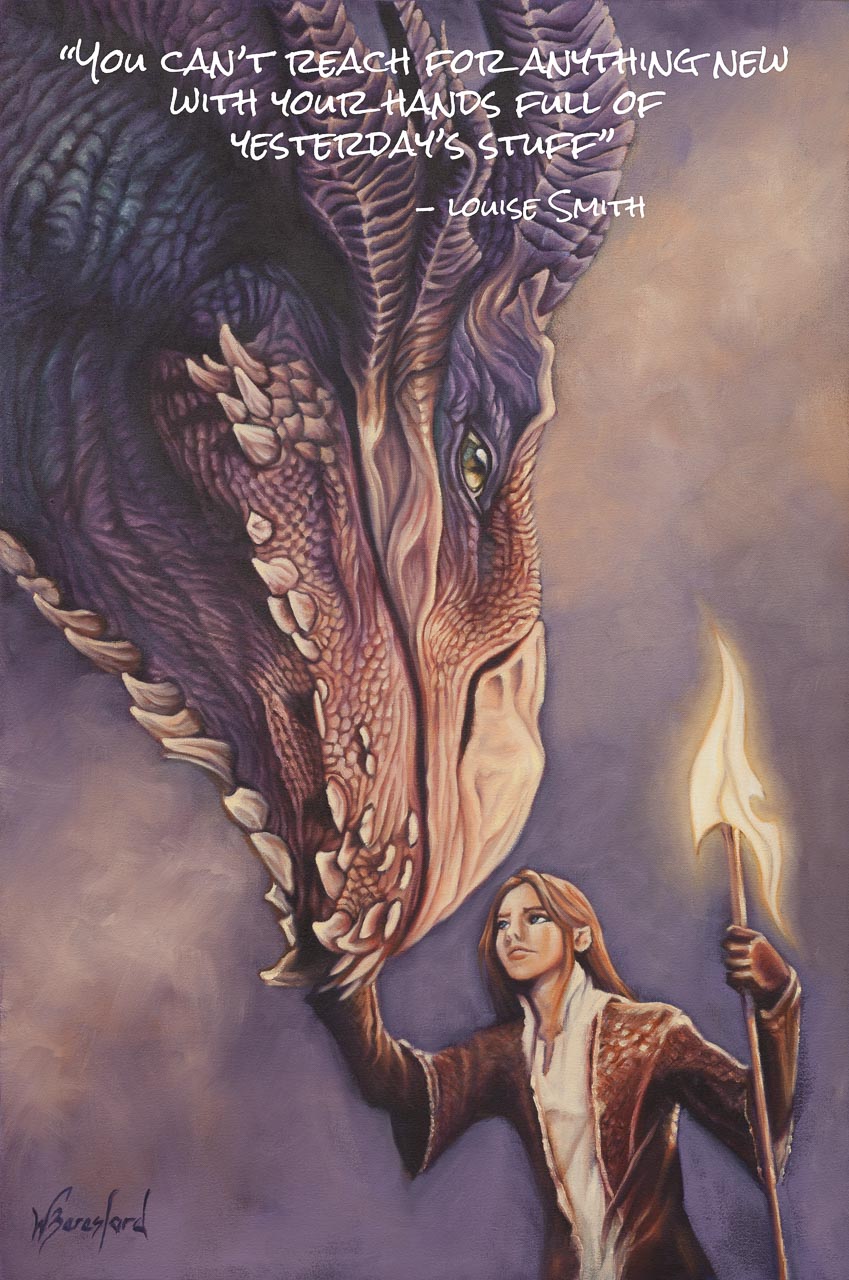 Dragon and Elf by Wendy Beresford

Today is Easter Sunday.  It’s resurrection time, ascension time.  Death and rebirth, literally.  The fourth step for all us master manifestors in training is akin to the third-quarter square phase of the lunar cycle.  This is when we have the opportunity, after the harvest, after seeing the results, to wrap things up.  It’s a step that can so easily be brushed over, but without it, our lives and creations are left undone and incomplete.  These incompletions linger and their very existence drains our energy and weighs us down, making taking the step into “what’s next?” cumbersome, tiring and confusing.  If we haven’t consciously completed, or deemed complete, we’re not done yet.

Death and rebirth are two sides of the same coin and are ruled by the same sign and planet – Scorpio and Pluto.  One simply cannot be without the other.

It’s time to move onto new projects, ideas, actions, intuitions and creations.  You can feel it.  You’re beginning to get ideas and urges that well up from deep within you, but something is holding you back.  What needs to be released?  What needs closure?  What’s got you hooked so you can’t move forward?  This year of 2018, and the next two and a half year cycle of Saturn in Capricorn, is about discerning what we don’t have time for, what we don’t want to lug with us up the mountain.  It’s time to simplify.

What is an incompletion?

It’s those emails you subscribed to that are sitting in your inbox, which you know you’ll never read.  It’s those fifteen ebooks you downloaded and can’t remember why.
It’s that action that didn’t work out but you’re busy ignoring the consequences and avoiding dealing with them because they’re a reminder of a perceived failure.
It’s that conversation you know you need to have, but your mind has convinced you that its better left well alone… perhaps the issue will just go away if you ignore it long enough.
It’s those jeans, your favourites, that just need a patch to stop your bum hanging out, or just need to be recycled into painting rags.  It’s that appliance that bombed and needs to be repaired or replaced.
It’s that financial plan that’s waiting for implementation… just the next step… it sits on your to-do list, glaring at you balefully every morning, draining your well-being and making you feel tired.
It’s those piles of crap – emotional, spiritual, physical and material – that clutter up your space and remind you of your promise to yourself that you’ll deal with them one day.
It’s those unfinished paintings or creative projects that languish in an ugly pile in your studio, taking up space and energy every time you look at them.
It’s those reminders of old business ideas that didn’t pan out – old business cards or flyers or dormant websites.
All these incompletions take up valuable energy, space and time, just by existing.  They keep us feeling stuck and overwhelmed.

Our minds are meaning-making machines.  We apply meaning to everything.  All our meanings and stories make life very complicated, and this serves us because we are taught that “complicated” and “hard” equals valuable.  Especially if we’ve become attached to a project or issue, or spent a lot of time or money on it, we feel we must make it succeed, even in the face of inevitable failure.  Perhaps we’ve lost interest or refined our vision in a way that doesn’t include previous “starts” and ideas, or perhaps the direction we’re drawn into now looks different.  And that’s absolutely OK.  It’s alright.  But instead of letting it be so, we keep these old threads alive simply by not allowing them to be finished.  And that’s exhausting.

The truth is there really is no failure and even if things don’t pan out in the way we envisioned, we always learn and grow.  Everything serves us in one way or another.  There are no mistakes and no wrong choices.  Changing direction doesn’t mean the original direction was wrong.  In fact, it was perfect because it brought us to this point of a new direction.

Completion doesn’t mean succeeding, in the way of everything turning out exactly as you had planned.  But it does in another way.  Completion means finishing, being done with, even if that looks like cutting up and burning old canvases that you know you’ll never revisit, you don’t want to revisit.

Completion means taking whatever action is required to put the project down, and sometimes that action is simply deeming it complete and throwing it on the trash.  “Composting” is  a beautiful term that sounds better than “trashing” something, especially if it held value for you at some point.  What I’m talking about here is a decluttering; simplifying your life and gaining clarity from the past so you can move forward with energy and enthusiasm.

It’s time for a new cycle to begin and we must recycle the old in order to free up our energy to move on to the new.  If you feel stuck and unable to move forward in your life, although there’s an undeniable call to do so, then begin with the physical.  Take one drawer or cupboard and begin to physically declutter.  Get a box and dump stuff you no longer value or which no longer brings you pleasure or usefulness, into it.  Great questions to have in mind is “Does this bring value into my life?” and “Does this make me feel richer or poorer?” Make the process fun – put on some high energy music and sing and dance your way to a freer, clearer now.

And I promise you, the physical act of decluttering will open the way for you to let go of who you no longer are, a streamlining of your identity, perhaps even a complete letting go of having an identity, perhaps a whole new opening to who you really are… indestructible, ever-evolving and yet divinely complete.

We don’t need to hoard, we don’t need to cling.  As we are, we are enough, and what we do is enough.  Yesterday we had a full moon, which means we have two weeks of waning moon energy ahead of us until the next new moon.  This is a beautiful time to declutter.  Let it go, just let it go.  That action in itself is a form of forgiveness, deep self-love and acceptance.

My personal recommendation is to give away what isn’t recycled or trashed.  Contact your local hospice or SPCA and you’ll find they’ll likely collect.  They use these donations to raise money, and the sale of these items are a major income source.  If you have items of value that you want to sell, there’s nothing wrong with doing so, but don’t use that as an excuse to not move them out of your space as smartly as possible or to simply create another pile of incompletions where your daily thought becomes, “I must get those things advertised and sold!”

When we declutter, we make room for the new.  Every time, without fail, I have decluttered and dealt with incompletions, I have found it serves as a energetic enema or birth inducement method as it unclogs stuck energy and melts away resistance.  The new is just waiting to come in… all we have to do is give it permission and space.  Trust and celebrate death in each moment because it heralds rebirth every time.

‘Till next time, so much love